One of the first projects in the Longshed workshop was a 6-month community skiff-building project (running alongside but separate from the project to reconstruct the full-size replica of the Sutton Hoo Ship). The first skiff “Whisstock” was launched in April 2019. A team of local volunteers is now building a second skiff – which will be called “Whisper”.

The skiff-build projects use kits based on the traditional Fair Isle rowing skiff designed by Ian Oughtred and manufactured by Jordan Boats. These kits are used by many groups throughout the UK and abroad. The completed 22ft clinker-built 4-oar skiffs are constructed and rowed by people of all ages see St Ayles Skiff introduction.

for projects that are organised and managed by the participants/groups involved in each build. Each project will involve 5-10 people drawn from local organisations (clubs, schools, businesses) and members of the wider local community.

The first Longshed skiff-build was led by a small group of local enthusiasts, one of whom has already built a scale model of a St Ayles skiff.

Our aim is to make these projects as inclusive as possible so that anyone with an interest in woodworking has the opportunity to take part. As we gain experience of working with the St Ayles skiff kit, later builds will include young and older people, potentially working as mixed-ability teams. The benefits – skills development, team working, learning about boat design and navigation – will apply to everyone who takes part.

There is an established network of coastal rowing clubs in Norfolk, Essex and around much of the UK coast, and a well-established programme of local and national competitions. A Woodbridge Coastal Rowing Club (WCRC) has been set up to support the coaching and administration of local coastal rowing activities once the skiffs are built. The WCRC will be run as an independent organisation, potentially affiliated to one of the existing Woodbridge clubs. See the WCRC website for more information.

The first skiff-build project started in late Summer 2018, following initial fitout of the Longshed building. Friends from the Coastal Rowing Association in Blakeney came to see “Whisstock” launched in April 2019 along with a big crowd of local well-wishers. Whisstock is now managed by WCRC and regularly out on the Deben. 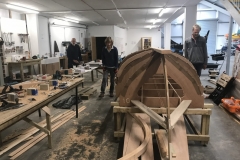 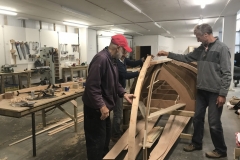 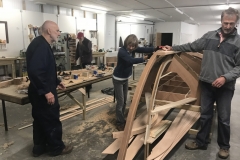 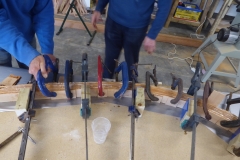 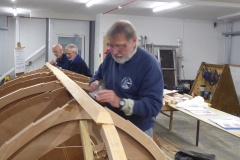 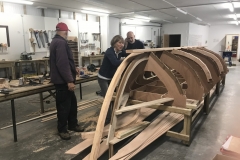 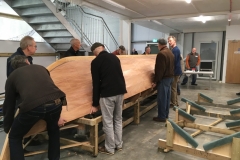 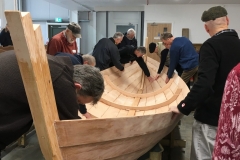 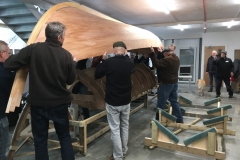 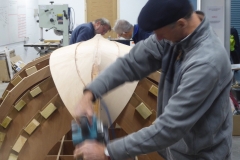 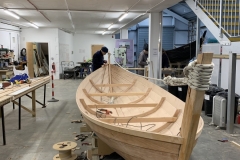 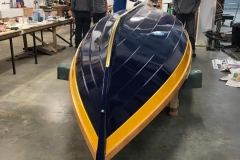 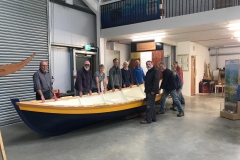 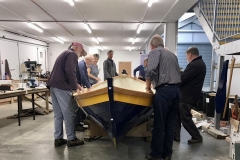 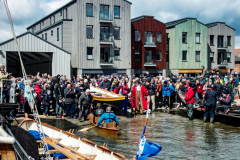 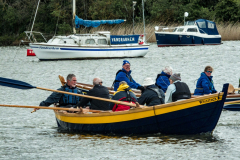 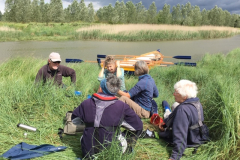 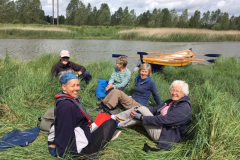 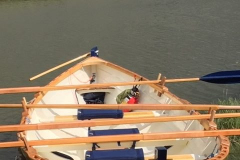 View Slideshow
We are very pleased that these first projects have been supported through Suffolk Coastal District Council’s Enabling Communities Exemplar Grant programme and a generous donation from the makers of the video Life on the Deben.

A new team of volunteers is building a second skiff “Whisper”. Work started in autumn 2019 and will be completed in spring 2020. The team has the advantage of being able to tap into first-hand experience of volunteers who have been involved in the first build.

If you are interested in organising or joining a skiff-building group, or sponsoring an organisation or company to build a skiff, please contact us to find out what is involved email: info@woodbridgeriversidetrust.org