Building a replica of the Sutton Hoo royal burial ship

The SHSC started work in the Longshed in 2019, you can find more information on the Ship’s Company website.

You can help take this project further by sponsoring a fixing for the ship.

The Anglo-Saxon ship reconstruction in the Longshed is a unique project set up by our sister charity the Sutton Hoo Ship’s Company.

Just across the river Deben from the Longshed are the ancient burial mounds of Sutton Hoo, where the first King of England, Raedwald, was interred in a burial ship with many great treasures very nearly 1400 years ago in 625 AD. This huge ship, which was over 27 metres or 90 feet long – was dragged up the hill to a final resting place where it lay undisturbed for over 1300 years, until it was excavated in 1939 just before the Second World War. 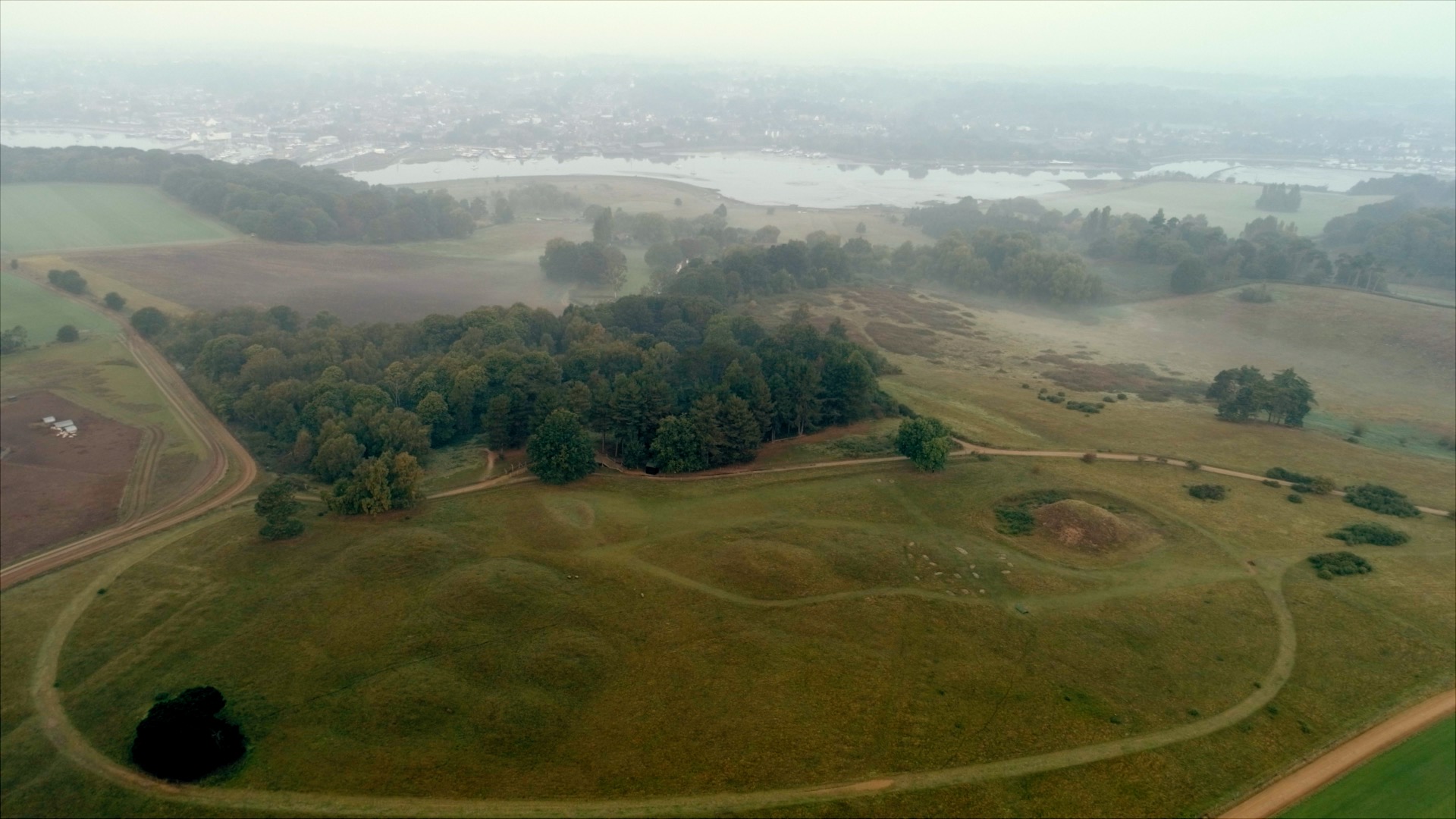 You can see archive film of the excavation. Most of King Raedwald’s treasures are now in the British Museum, but you can see other artefacts and reproductions at the National Trust site at Sutton Hoo. 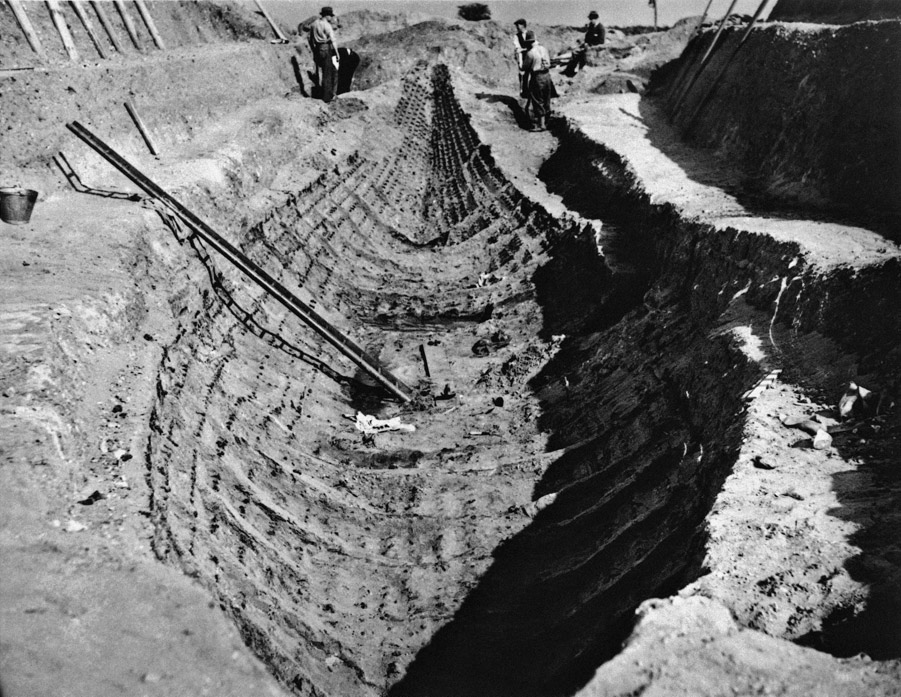 Nothing was left of the ship except the ghost of an impression in the sand and a number of iron rivets which lay in rows where the wood had disappeared. 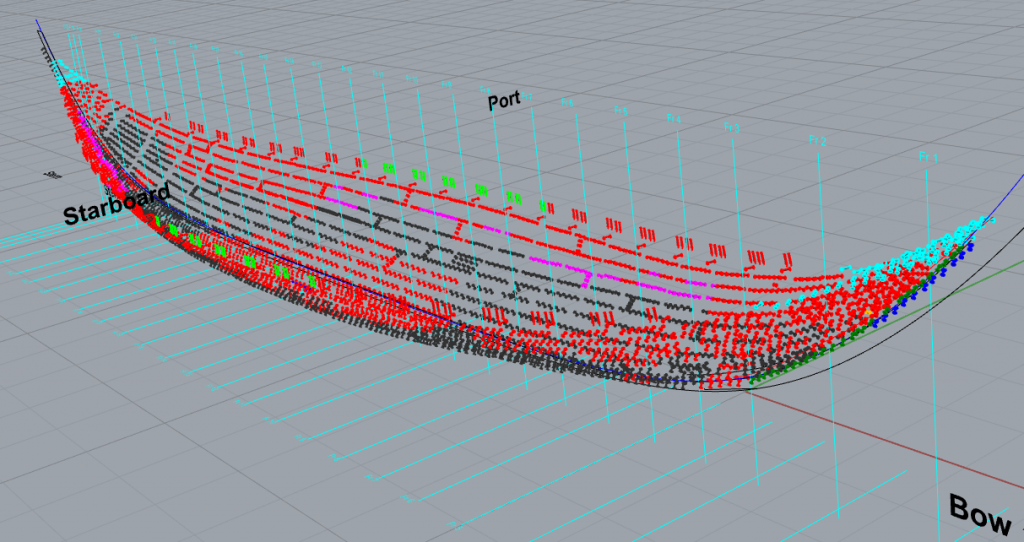 Sutton Hoo Ship Rivets
In the picture, the 3000 rivets have been mapped digitally by one of our researchers, Pat Tanner

Ship Size
Here is a banner of the ship, actual size, in the Longshed

Much is already known about the ship – but much is unknown too. To find out more The Sutton Hoo Ship’s Company (SHSC), our sister charity, has commissioned research and held an international Symposium on the hull shape, materials and construction methods. Using this information they will build an authentic reconstruction of the ship in the Longshed. Founded on 5 years research and preparatory work the SHSC was set up in 2016 with a prime purpose to create an interpretation of this Anglo-Saxon ship that provides the best possible means of testing and understanding how the ship could have been used under different conditions.

Why build a replica ship?

This project will gain new insights into the craftsmanship and seamanship of the Anglo-Saxons as well as their lives, culture and trade between East Anglia and neighbouring countries.

After the build the SHSC will carry out sea-trials, to test how the boat was propelled (by oars and/or sail), what it could have been used for, what it may have carried, under what conditions was it safe and therefore where it might have been used.

You can see in the picture below how elegant – and how big – our ship is, in this digital image from Southampton University.

SHSC have a unique opportunity now to build this ship; the space, the drive and the vision and want to contribute more to the scientific understanding of our Anglo-Saxon heritage and develop skills and interests in our community. We all want to row it!

The build is being overseen by academic and ship building experts, but the work is organised to enable local volunteers to be involved in all stages, either through active participation in the build process or activities such as recording, interpretation or guiding. SHSC is employing professional shipwrights for the critical parts of the build. There may also be opportunities for apprentices and students to work on the project.

SHSC are working with the WRT – who are responsible for guiding, exhibitions, education programmes and talks.

Below is a picture of what is technically known as a Minimum Reconstruction Drawing – a lines plan of the Sutton Hoo ship’s hull. 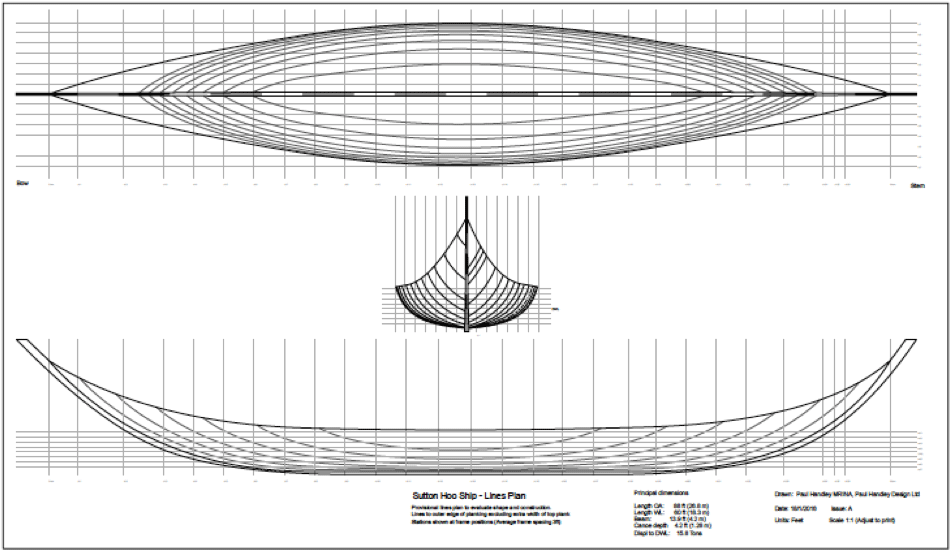 The original ship was ship built from green oak (not seasoned timber). SHSC experts are seeking out trees to form the keel and the planks. 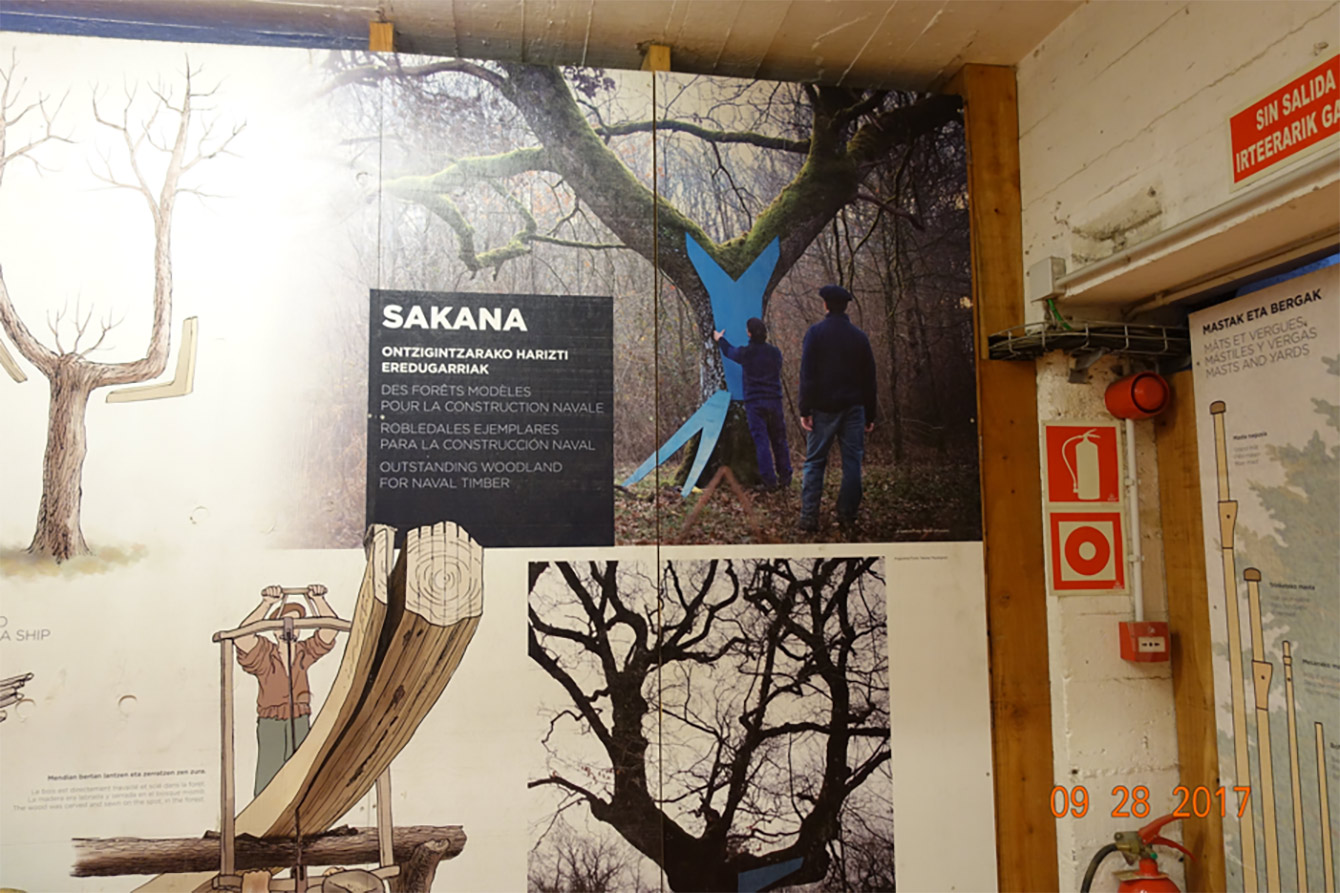 This image from the Albaola museum in Spain shows some of the processes involved in choosing trees to build a ship – in this case a replica of a 17th century whaling ship. The men are holding up cut-outs of the part of the ship they want to make from the tree.

However, Anglo-Saxons didn’t have saws, like the ones in the illustration. All the planks had to be split from the logs. This is a lengthier process but split planks are stronger weight for weight as they follow the natural grain of the wood.

SHSC also need to be able to reproduce the rivets that held the ship together; the original ones were from bog iron, which we cannot get in the quantities we need – there will be more than 3000 rivets altogether – and in any case it may not be possible to forge it the right way – so the right substitute has to be found. And not enough is yet known about cordage, thwarts, tholes, oars, anchors and so on…..the list is very long.

The project has advanced hugely since the summer of 2019 thanks to the recruitment of professional shipwrights Tim Kirk and Jamie Clay. The foundation for the keel is laid – the Strongback – is in place and work has progressed well though the development of a midship section to test rowing positions and building techniques and a 1:5 scale model which is a proof of concept of the digital plans. The volunteers have also made sets of oak clamps and a number of trenails (wooden fixings for the ribs), using their bespoke axes, commissioned from Alex Pole, blacksmith. There is much more to see from him and others in the regular newsletter, to which you can freely subscribe. 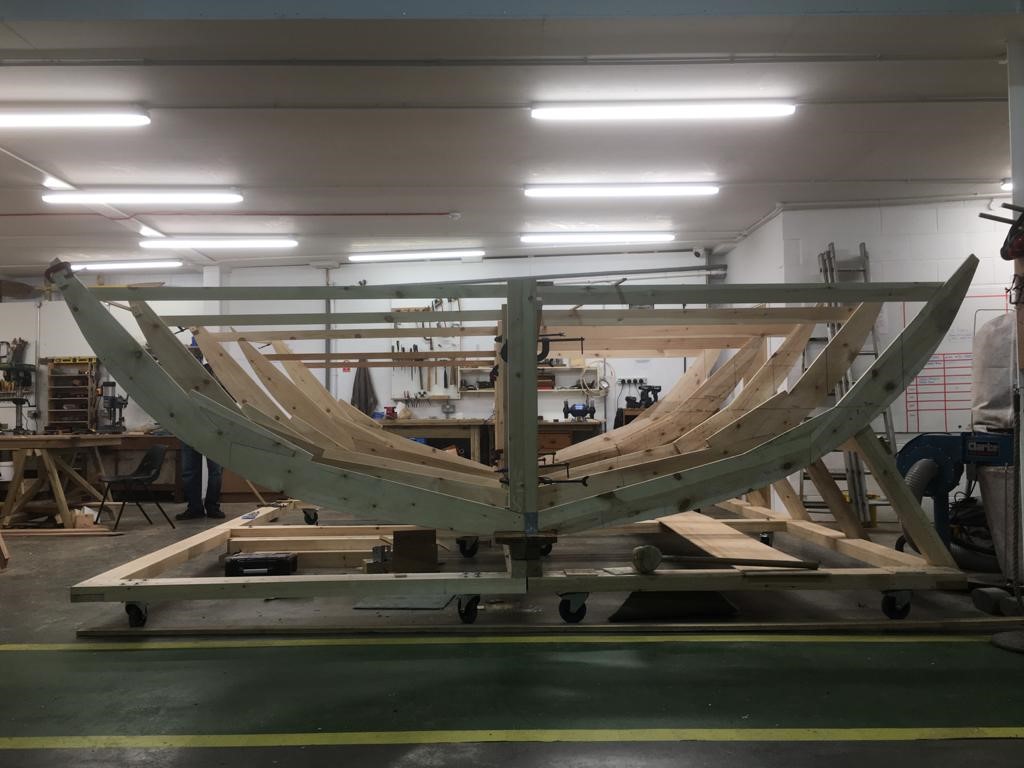 Partially completed experimental midships section; this will be used as a test bed to try out rowing positions and internal fittings – but can never go to sea!

The SHSC started work in the Longshed in 2019, you can find more information on the Ship’s Company website.

You can help take this project further by sponsoring a fixing for the ship.